There’s an ancient Persian proverb that says, “When you understand how to do a thing, the doing is easy; if you find it difficult you do not understand it.” There are of course numerous homestead activities where a basic understanding can make the difference, not only between making a thing simple or difficult, but between a gratifying success or disheartening failure. And nowhere is this dichotomy more evident than when one attempts to modify plant environments by the use of a forcing structure.

Some types of plant shelter are simple and easily understood; a shade or windbreak screen, an arbor or even a cold frame are rational structures requiring minimum knowledge to construct and manage. But it’s a different ball game when one attempts to modify plant environment in a greenhouse situation.

A greenhouse is something more than a sun trap and a light trap for the benefit of plant growth; its complexity lies in the fact that plant forcing, itself, is a highly complicated affair. In a greenhouse there exists a so-called trinity of plant ecology, which necessitates a balance between light (heat), moving air, and controlled humidity.

Temperature, first of all, affects plant growth because it directly influences such internal processes as photosynthesis. Plant growth also requires respiration, which is energy generated by the breaking down of energy manufactured by the plant.

Now to illustrate how this trinity principle works: during the day, sunlight promotes plant growth through photosynthesis; plants absorb light energy to reduce carbon dioxide in the air to sugar. High daytime temperatures require high relative humidity and high soil moisture to balance the increased water loss through the plant. We see here that the plant environment includes not only the vegetative — above ground – considerations such as temperature, humidity, radiation, air movement and gas content of the air. There is also the root environment to consider: root temperature, soil moisture, plant nutrients, and soil structure.

And there is yet another complication: not only do different plants require different environments, but the nighttime factors are different from the daytime. At night photosynthesis stops and reactions associated with reproduction occur. A low temperature at night produces growth, flowers and fruit.

For example, F.W. Went, then director of the Earhart Plant Research Laboratory in Pasadena undertook lengthy and painstaking experiments and discovered optimal temperature and humidity requirements. Tomatoes, for instance, require an optimal daytime temperature of 80 to 90 degrees Fahrenheit, nighttime 65 degrees F. The optimal daytime humidity was found to be 50 to 80%, nighttime 95%. Went’s findings proved important to the furtherance of plant growth knowledge — it also pointed to some obvious inefficiencies of conventional greenhouse design.

The “greenhouse effect” is an expression which applies to a building having excessive radiation buildup. As one would suspect, greenhouses are troubled with “greenhouse effect” . . . so is our atmosphere. Atmospheric vapor filters shortwave solar radiation (ultraviolet). Water vapor, however, is transparent to visible light, which warms the earth and re-radiates longwave (infrared) rays back to the atmosphere. Some of this infrared heat is absorbed by the atmosphere, and some is reflected back to earth. The earth’s atmosphere acts like glass in a greenhouse: opaque to longwave but transparent to shortwave radiation. In a greenhouse situation this effect works in much the same fashion: the ground and vegetation inside are heated by the transmission of ultraviolet rays from the sun. These contents then give off heat in the form of infrared radiation. Window glass, however, will not allow these longwave radiations to escape so they are retained (to the actual detriment of the vegetation inside).

Heating from strong radiation reduces the nighttime humidity of the air when a high water-saturation is especially needed. Artificial heating also tends to lower the relative humidity. Went overcame these obstacles in his experimental greenhouses by employing elaborate, highly sophisticated, artificial conditioning devices. These methods are of course not available, nor even desirable for small scale greenhouse production. A better home-grown solution is to design a greenhouse structure that provides optimum growing conditions.

A little greenhouse research reveals the fact that the oldest reported forcing structure was not a greenhouse as we know it today. It was, rather, a pit covered with glass on the south side, and earth insulation on the north. A so-called pit greenhouse. The pit greenhouse is practically unknown among horticultural circles, yet it proves to be a far more sensible, economical, and efficient forcing structure. 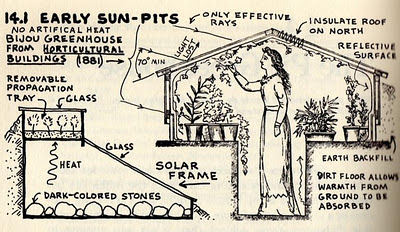 In principle the sun pit is an “unheated” greenhouse. That is, it relies entirely upon solar and ground heat rather than auxiliary furnaces , which are always required in conventional greenhouses in cold climates.

There are both ephemeral cranks and foremost representatives of science involved in the study of forcing plants in artificial stricture. Sometimes the sifting out of the true and beautiful is not all that easy; even the scientific opinion raises questions and problems that seem unanswerable in our lifetime. But there is much of this information that can be used to advantage by today’s organic enthusiast. Are you ready?

An Explanation of Light and Heat in the Greenhouse

Let’s start with light and heat. To function properly, a greenhouse requires maximum light. But admitting desirable light also admits a possibly excessive and undesirable temperature buildup. High temperature causes plant respiration which tends to disturb the metabolic process. It is the infrared (heat) region of the solar spectrum that causes this temperature increase. The greenhouse operator who shades with whitewash on the glass for shade, thereby reducing entry of shortwave rays, is sensitive to plant respiration. Opaque shading is a shortsighted solution, however, because the balance of light rays is thereby inhibited on the other end of the spectrum, restricting the narrow ultraviolet (shortwave) rays.

The “greenhouse effect” also takes place as a result of faulty (e.g., standard) greenhouse design. As the contents of a greenhouse are heated, this interior heat is given off in the form of infrared radiation. Though given off, the heat never leaves the greenhouse: window glass does not transmit longwave infrared radiation. Heat consequently builds up inside, and plants “burn”. Furthermore, window glass admits only about 5% of the ultraviolet rays, which really makes glass a health hazard for man as well as for plants. Ultraviolet radiation controls bacterial and viral populations, and when the rays are filtered out upper respiratory troubles are apt to occur, especially during winter months in cold climates.

The obvious solution here is to use a type of translucent material which admits the maximum amount of light, and maximum quantity of ultraviolet radiation and the minimum degree of infrared intensification. Fiberglass plastics meet these specifications: as much as 95% of the ultraviolet rays are admitted (as against 5% for window glass). Glass fibers and crinkled surfaces diffuse infrared heat rays, making this material almost a perfect solution for greenhouse coverings.

Light is the energizer for the primary growing process known as photosynthesis. The “white” light visible in the ultraviolet range of wavelength is actually made up of tones of violet, blue, green, yellow, orange and red; light projected through a prism will demonstrate this range of color. Scientists have for a long time been interested in the ultraviolet waves, known also as actinic rays. Some of the actinic rays that shine through chlorophyll are absorbed. From plant-growing research that extends to 1880, we know that in photosynthesis, plants use more light from the blue and red parts of the spectrum. Little use is made of green, yellow, or other actinic rays . . . in fact, violet rays actually inhibit plant growth.

Philips Research Laboratory, Eindhoven, Netherlands has shown that three processes are present: carbon dioxide absorption, chlorophyll formation, and chlorophyll synthesis (photosynthesis). Carbon dioxide is absorbed into the plant through the stomata, located in the epidermis of leaves (oxygen is also transpired through the stomata). Stomata open under the influence of light, and are more widely open in the presence of blue light than either red or green. Evaporation and photosynthesis are intensified and chlorophyll production is accelerated when exposed to blue light.

In an experimental greenhouse one section of the greenhouse blue-tint fiberglass panels were installed. Results from the use of blue fiberglass were immediately apparent: the growth rate increased, the plant fiber strengthened, yields were greater and the taste of vegetables improved. This experience fully substantiated the blue-glass theories postulated a hundred years ago by General A.J. Pleasonton. In 1861, this inventive genius built a 26-foot by 84-foot greenhouse with every eighth row of blue-colored glass. His results were rather astonishing (as reported in his book, THE INFLUENCE OF THE BLUE RAY OF THE SUNLIGHT AND THE BLUE COLOUR OF THE SKY, In Developing Animal and Vegetable Life, In Arresting Disease, and In Restoring Health in Acute and Chronic Disorders to Human and Domestic Animals; Philadelphia, 1876).

Greenhouse experts, like gardening experts, are never in agreement as as to proper direction to orient the structure or to plant the crops. A southwest exposure may provide more light, but in the afternoon the energy of the plant has started to wane. So actually a southeast exposure is best, as the morning hours for a plant are most productive. Of greater importance than orientation is the slope of greenhouse walls; the amount of fight transmitted or reflected depends upon the angle that the light beams makes with the greenhouse wall. The angle of incidence should not be less than 70 degrees. Some solar heating engineers use the formula “Latitude + 13 degrees = angle of glass to horizon” to get maximum winter penetration and maximum summer reflection.

About 50% of the total sunlight striking a greenhouse is dissipated. This loss can be reduced considerably by reflecting the light from the southern half of the sky against a north-facing wall. This north wall should have a smooth white surface for maximum reflection. And of course this north wall should be properly insulated. The ideal greenhouse should have a dome shape, cut vertically along an east-west line.

Following theoretical considerations, the practical approach to greenhouse design is to build a scale model and investigate the yearly sun path.  All of this contributes to that all-important, number one factor in planning: make your mistakes on paper. (Source)