Being self sufficient in the food department without going vegan implies the raising and keeping of livestock. Below are some general guidelines for raising pigs.  This information does not cover breeding.  If you have never raised a pig before, it is best to raise one or two for the freezer to get an idea of their behaviors, abilities, and personalities.  Breeding can be tricky and handling boars can be dangerous.  If, and when, you decide to buy a pig to raise, choose a gilt, or a barrow (a castrated male).  Either will give you a good indication of what to expect and will get you started on possibly breeding in the future.

Pigs, particularly in colder climates, are like most other animals, in that they need shelter against the rain and the sun, which is also important in that the lighter colored breeds can easily sunburn.  Unlike cattle, they are not content to lie under a tree in the rain, or turn their backs to the north wind and sleep out in the open when a cold front blows in.  They need a shelter with bedding to snuggle down in and stay warm and dry.  Particularly piglets, which need a constant temperature of 37 Degrees Celsius  at least for the first week or so.  In hot climates pigs need to be able to cool off.  It’s great if they have access to a pond.  If not, you can make puddles for them using the water hose.  Many of them, once they become accustomed to being on a water nipple, will hold down the nipple letting the water run out of their mouths and make their own puddles. 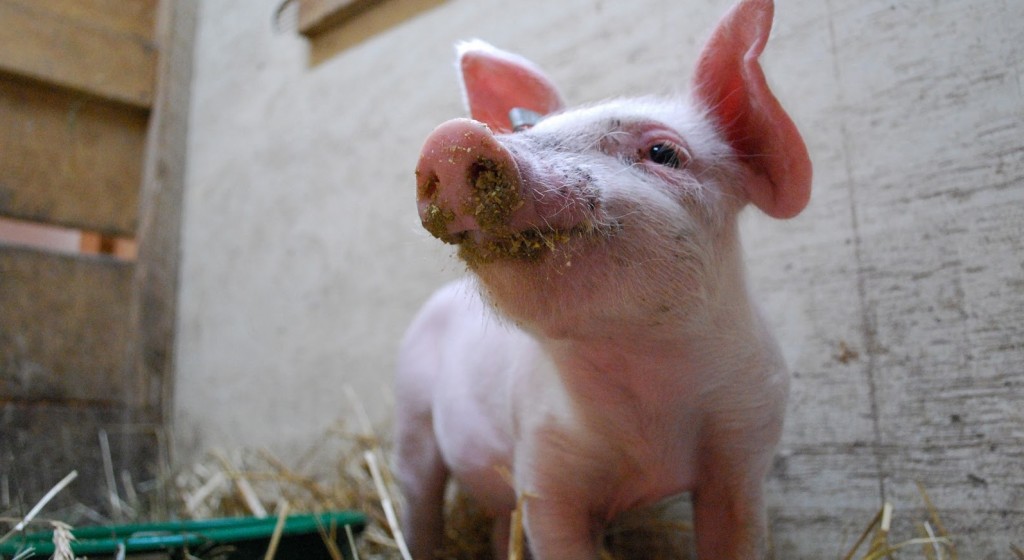 There are many quality swine feeds on the market, and generally a good 14-15% protein feed is good for maintaining your herd, however, gestating and lactating sows need more nourishment, as do weanling piglets, who need a higher percentage of protein.  Depending on how many pigs you decide to keep, you may want to go to a bulk feed, which is more economical.

It is my personal opinion that feeding hogs and pigs swill and garbage is not a practical choice.  Not only will they create a ‘sewage’ smell, but they tend to have more health issues.  That is not to say that you can’t raise one hog and feed it leftovers from the table.  There is a big difference between doing that and collecting food garbage from institutional type kitchens or restaurants.  Scraps are fine, but I would still recommend feeding a few pounds of quality feed as well.  A general guideline for feeding is four to five pounds of feed a day for adult sows and boars and free feed from the time they start nibbling (a couple of weeks) to finish, at about two hundred and fifty pounds.

The one rule of thumb to remember when raising pigs is that if they go off their feed, there is a real problem and one that needs to be addressed immediately.  A hog’s primary goal in life is to eat.  If they stop doing that, start asking questions.

You will not be able to hold a hog in with goat wire, or barbed wire. A single strand of electric fence inside the perimeter of the goat wire, is what they respect more.  Generally after they touch the wire once, they will not risk touching it again, which makes it a very effective fencing element as even if the power goes off, they will still assume that the wire is live and stay away from it.  Never make gates out of electric fencing if you ever hope to have the pig cross through that gate.  It ain’t gonna happen.  They don’t forget.  If you want to build a simple small pen to hold one hog, bear in mind that pigs can root under and go over and break through things you wouldn’t expect them to be able to.  Particularly a boar who gets wind of a sow in heat, or a sow that is seeking a boar.  If you use wood, use two by sixes at least, if you use hog or cattle panels, make sure they are attached to posts that are deep in the ground and staple them very well.  Top to bottom.  Above all, use common sense.  Do not surround a pig pen with metal panels or plywood.  They cannot get air to cool them off in the summer.  Your pen is only as good as the effort and construction that you put into it.  Ask yourself, would I be able to make myself comfortable living in the elements in that pen? Generally a contented animal will not have a reason to break out.  Also don’t pen them in with any trees that you care to keep, as eventually they will de bark it and root it up and the tree is no more.

Pigs need a constant supply of fresh water and the best method I have found is to install a water nipple.  Make sure that all plumbing other then the nipple is outside the pen as they will root up buried plumbing in a heart beat.  Using tubs is not effective as they will tip it to lay in the mud.  Unless you plan to be on hand to fill the tub two or three times a day, don’t use tubs.

Have a plan.  If you buy a small pig to raise and put in the freezer, and are not prepared to slaughter this animal, start making arrangements early to find a butcher who will handle the task.  If you cannot transport the animal, make sure that the butcher is prepared to collect it and take it to be butchered.  Many times, in rural areas, local butchers and schools will organize lessons where the kids learn about slaughtering and butchering,(Gardening and food preparation are still being taught in many eastern European schools.) It is highly cost effective to do it this way.

Be kind to the animal.  Take care of it and feed it well, always keeping in mind your goal.  Otherwise you will end up with a five hundred pound pet named Porky and still no meat in your freezer.