A foundation of a building as the name implies is the start of a building construction on site really. The type of the building, the nature of the soil and environmental conditions are the major determinants in the choice for a type of foundation.

This is the most common type of foundation, it is mainly used where you have a strong soil base and non-waterlogged areas. Most small one or two story buildings of are constructed with this type of foundation . Depending on the structural requirements, the depth of a foundation can range from anywhere between 600mm to 1200mm for smaller scale buildings .

The concrete foundation is usually poured in axcavated trenches and can be anywhere from 150mm to 450mm thick depending on building requirements. The concrete is usually reinforced with steel bars to prevent uneven loading and cracking of the foundation

Pad foundation refers to the foundation which is intended for sustaining concentrated loads from a single point load such as structural columns. This is when isolated columns (pillars) are set on concrete pads to carry a structure on top This type of foundation can be used to under a variety of buildings or shelters. 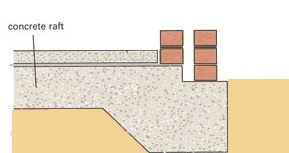 A raft foundation is essence a concrete slab. The purpose of the slab is to distribute the load of a building built on the site not exceeding the soil bearing conditions. A raft foundation  uses it large surface to evenly spread the weight of the building over a large area so the soil can bear the stress.

A level earthwork platform (soil mattress) is constructed and compacted according to the design requirements. A grid of beams is excavated. Perimeter shuttering and shuttering for steps and such is erected and the slab and beams are reinforced with steel. After this concrete is cast. The concrete slab can be constructed to the exact dimensions and levels from which the rest of the building can rise.

A pile foundation is an engineering concept that is, at its most basic, a substructure that is supported by piles.  This type of foundation allows any type of structure to actually be supported by a layer or layers of soil.  The soil is actually built up under the ground surface and the deeper the pile, or support pole, goes, the more stable the structure should be.  There are two basic parts to a pile foundation: the pile and the pile cap.

The pile cap serves as the base of the structure.  It’s similar to a spread footing of the building in such a way in that it can support a slab, a wall, or a structural column.  However, it is different in that it puts all of the weight on a pile or a group of piles.  The pile is the structural stilt that is driven or cast into the ground.  The weight load is distributed across all of the piles used in the structure, and this pile cap load is also transferred to the soil that is located around the pile tip, which is the end of the pile.