Several different technologies are used in the generator portion of for example wind turbines (wind generators). One of the older, more reliable technologies is the brush less DC alternator. The operation of them is often poorly understood by the owners and in some cases, poorly described by the manufacturers. Therefor I like to share a little insight. I’m not an expert on brush less alternators, I am however a technician and seriously interested in how they work.

When an electric current is passed through a coil of wire, a magnetic field is produced (an electromagnet). Conversely, when a magnetic field is moved through a coil of wire, a voltage is induced in the wire. The induced voltage becomes a current when the electrons have some place to go such as into a battery or other load. Both of these actions take place in alternators, motors and generators or dynamos.

Voltage is generated when a coil of wire is moved through a magnetic field. It doesn’t matter whether the coil is moving or the magnetic field is moving. Either configuration works equally well and both are used separately or in combination depending on mechanical, electrical and other objectives. The old DC generators (dynamos) used a stationary field and rotating armature.

Automotive alternators use the opposite configuration with a rotating field and stationary armature. In a brush less alternator, both configurations are used in one machine. 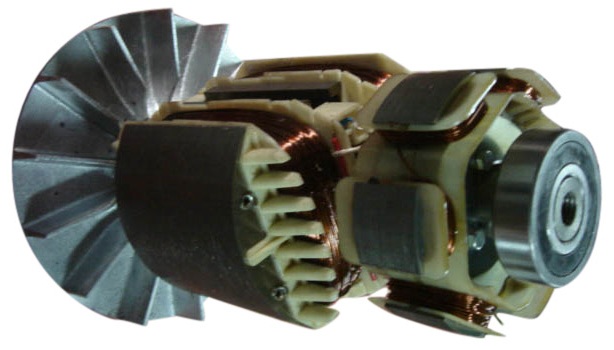 The exciter field coils are on the stator and its armature is on the rotor. The AC output from the exciter armature is fed through a set of diodes that are also mounted on the rotor to produce a DC voltage. This is fed directly to the field coils of the main alternator, which are also located on the rotor. With this arrangement, brushes and slip rings are not required to feed current to the rotating field coils. This can be contrasted with a simple automotive alternator where brushes and slip rings are used to supply current to the rotating field.

The main alternator has a rotating field as described above and a stationary armature (power generation windings). This is the part that can be confusing so take note that in this case, the armature is the stator, not the rotor. With the armature in the stationary portion of the alternator, the high current output does not have to go through brushes and slip rings. Although the electrical design is more complex, it results in a very reliable alternator because the only parts subject to wear are the bearings.

In many diagrams and explanations, you will encounter the term “AVR”, with no explanation of what it is. AVR is an abbreviation for Automatic Voltage Regulator. An AVR serves the same function as the “voltage regulator” in an automobile or the “regulator” or “controller” in a home power system.

As with any other electronic or electrical device, there can be numerous variations in the design. Some configurations use an auxiliary winding on the main stator to generate the voltage for the exciter field. These machines rely on residual magnetism to excite the auxiliary winding while other machines use permanent magnets for this purpose.

A three phase alternator has a minimum of 3 sets of winding’s spaced 120° apart around the stationary armature (stator). As a result, there are 3 outputs from the alternator and they are electrically spaced 120° out of phase with each other.

A multi-pole design will have multiple sets of 3 winding’s. These sets of winding’s (poles) are spaced evenly around the circumference of the machine. The more poles there are, the slower the alternator turns for a given voltage and frequency.

More poles increase the complexity of the alternator and that in part accounts for the higher price of slow speed versions.

Other than in single-phase power plants, most alternators, including the automotive type, generate 3- phase power. A three-phase AC alternator will not have any diodes in it. If the output is DC, it will probably have 6 diodes to convert the output from the main alternator to DC. This is the configuration used in automotive alternators.

A 3-phase brushless alternator may have 4 or 6 diodes on the rotor for the exciter output in addition to the diodes that may be on the stator.

There are two ways that 3-phase machines can be wired.One is the delta (triangle) configuration with one wire coming off each “point of the triangle”. The other is the wye (Y) or star configuration. They have one wire from each branch of the “Y” and in some cases a 4 th common wire is added from the center/centre point of the “Y” (the common connection point between the winding’s).

Multiple voltage machines will have additional wires to allow them to be configured for the desired system voltage.