Day lighting offers many important beneﬁts. First, there are a variety of psychological beneﬁts associated with human needs for connections with the outdoors. We evolved mostly under tree canopies and on open plains, almost totally immersed in the natural environment. It is not surprising, then, that we have strong needs for continuous interaction with that environment.

The second most important beneﬁt is for interior illumination. Day lighting was necessary before inexpensive, smokeless electric lighting came along, so our architectural design traditions have provided us with extensive knowledge and many ancient strategies for introducing natural light into structures. Finally, using natural light to provide illumination saves energy by diminishing the use of electricity for electric lighting while lowering cooling loads.

It is difﬁcult to beat a conventional window for the many beneﬁts it provides. Proper design, of course, is critical in order to avoid problems of glare and overheating, or draftiness on cold winter nights. However, unless windows extend upward a signiﬁcant distance, or are turned into roof monitors or clerestories, their beneﬁts decrease rapidly with distance from exterior walls. 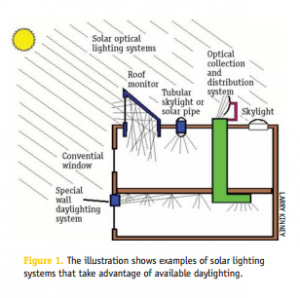 In attempts to provide good illumination deeper into a living or working space, scientists have designed and constructed various systems that combine glazing with reﬂectors (see Figure 1). As the sun moves through the sky, however, passive versions of this strategy have difﬁculty working well all day long. When the window is south facing, active tracking can improve performance. Conventional roof skylights are another widely used passive day lighting strategy. The principal problems with this approach are that clear skylights transmit direct beam daylight that is hardly impeded. This can result in localized overheating and glare from the very bright sunbeams directly or from the light reﬂected from surfaces they strike inside the room.

The use of diffusing glazing can soften the glare somewhat, but this kind of glazing rejects much of the incident light, due to reﬂection and scattering,resulting in a ceiling that alternates between quite bright areas and quite dark areas. The use of deep wells below the skylight glazing can help ameliorate glare problems but the deep wells further reduce light transmission.

Tubular skylights composed of clear glazing on top, a highly reﬂective light pipe from roof to ceiling, and a diffusing glazing at the ceiling height can solve many of these problems,but not the hotand-cold spot issue. Further, both kinds of skylight result in substantially reduced light levels when the sun is low in the sky—during mornings and late afternoons.

Many active day lighting systems developed in the past have failed because the systems were overly complex, made of high-cost components, lacked durability, or because low energy costs have reduced people’s incentive to save electric light energy.

A number of recent developments offer renewed opportunities for reliable active day lighting designs of broad applicability and effectiveness. For example, owing to developments in modern electronics and the emergence of inexpensive computer-controlled mechanisms for the robotics industry, active control mechanisms can be simple, reliable, and relatively inexpensive. In addition, several new,high-reﬂectivity optical materials are available at modest prices, mainly for  advanced luminaire design in electric lighting applications,but equally applicable for day lighting.

Furthermore, advances over the last couple of decades in our understanding of non-imaging optical systems for illumination have opened the way for controlled beam day lighting systems that can be both cost effective and glare free. Finally, as world oil production peaks and then declines, while large developing countries demand more petroleum for their growing industrial base and transportation uses, energy prices will soar over the coming decade and over-dependence on coal will exact high environmental costs.

Thus, opting for a well planned day lighting system will be cost-effective and the environmental beneﬁts will be lasting.