Lithuanians like to eat a lot and enjoy good food. The traditional cuisine is pretty simple but has a variety of interesting dishes. Rye, potatoes, various meats, beet root, mushrooms and diary products are often used when preparing Lithuanian food. In this article we introduce you to some of the most common true Lithuanian dishes.

Didžkukuliai, more often known as cepelinai is probably the most popular Lithuanian dish

. While it’s considered an old traditional meal now, potatoes were brought to Lithuania in 17th century and only became widely used for food in the beginning of 19th century.

Cepelinai are big, Zeppelin-shaped (that’s where they get their name from) dumplings made from potatoes stuffed with meat. They are usually served with sour cream, spirgai or mushrooms. Some restaurants serve a vegetarian version of the cepelinai made with a curd filling instead of meat. As you can imagine, it’s a rather filling meal with enough calories to make any light eater or dieter run for the hills.

Duona (bread) is probably the oldest traditional Lithuanian food that has been the center of Lithuanian cuisine for hundreds of years. It played a role in various agrarian rituals and still is sometimes used in wedding ceremonies. Bread was shown great respect and viewed as holy. Lithuanian dark rye bread is delicious, heavy, fragrant and can remain fresh for a long time. It can be eaten during breakfast, lunch or dinner. However, it isn’t as popular these days as it was in old times.

Šaltibarščiai is a popular summer soup. It’s made from cooked shredded beets, cucumber, dill and green onions. All the vegetables are put into a pot and cold soured milk or kefir is added. Šaltibarščiai are usually served with hot boiled or fried potatoes on the side. Sometimes a sliced hard-boiled egg is added into the plate as well. It’s a great meal on a hot summer day.

Balandėliai (“little doves”) are made from cabbage leaves stuffed with a minced meat, rice and onion filling. They can be served with sour cream or tomato sauce. Note: since rice is not grown in Lithuania, pearl barley had been used instead in the traditional recipes.

Bulviniai blynai, or potato pancakes are one of the many Lithuanian dishes made from potatoes. They are usually served with sour cream, sometimes with mushrooms. They are oh-so-very tasty, never mind the extra calories. 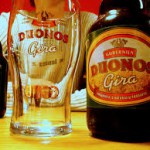 Gira is a fermented drink made from black rye bread. It is considered a soft drink but contains some alcohol (0.05-1.5%) due to natural fermentation process. Gira has a unique flavor, contains a lot of vitamin B and is a great drink for a hot day. It is known as “kvass” in Russia and is popular in other countries of Eastern Europe as well. 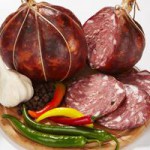 Skilandis is a pig stomach stuffed with minced meat, cold-smoked and matured for some time. It is one of the many smoked meat products that are popular in Lithuania, such as smoked and dried ham or smoked sausage (dešra).

Lašiniai are slabs of pork underskin fat with skin, often eaten as an appetizer with bread and/or onions. Lithuanian lašiniai are a smoked product while the Russian and Ukrainian version salo is usually salted.

Kūčiukai are small pastries made from leavened dough. They are traditionally consumed on the Christmas Eve withaguonų pienas. Aguonpienis, or “poppy milk” is made by soaking poppy seeds in water for a day and then crushing them until a white liquid comes out. It is then diluted with some cold water and sweetened with honey or sugar.