Hemp as an industrial product has been around for thousands of years. After a period of decline it is now beginning to show a re-emergence in this eco-age as a sustainable building product.

Hemp comes from the Anglo Saxon word haemp’ and is the popular name for plants of the cannabis genus. Hemp usually refers to the strains of the plant cultivated exclusively for industrial use as opposed to cannabis which is associated with pot and similar drugs.

Hemp has a huge variety of uses but continues to be overshadowed by the cannabis connotation of illegal drugs, with which it is often confused. However hemp can legally be grown, under licence, in many countries, including the European Union countries and Canada.

Cannabis sativa L. is the variety primarily grown for industrial purposes, it is a fast growing plant and has been cultivated for many thousand of years being used to make rope, clothing, paper, hemp oil and medicines. Growing hemp improves the condition of the ground and reduces ambient contamination. It is a robust plant that requires neither herbicides nor pesticides during its cultivation. 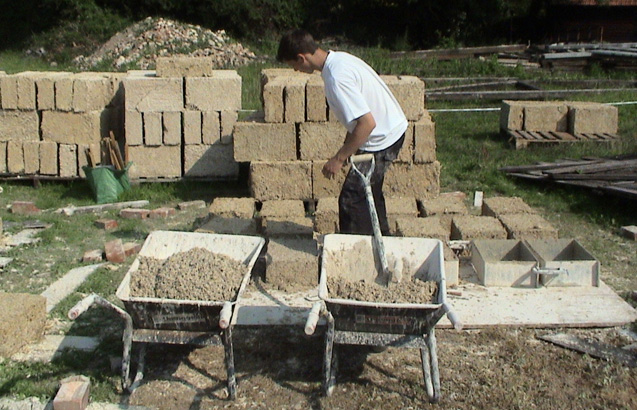 Industrial hemp has a long history, the first known use of hemp is as a cloth fabric, found in China and dating back to 8000B.C. Circa 4000B.C. hemp started to be used, again in China, to make ropes and as food. 2000 years later, the Chinese hemp oils and medicine were in use. By 1000B.C. its use had spread to India and Greece where the first instances of hemp paper were found.

By the 6th century hemp was being used in Europe in some amazing ways, in France a hemp reinforced bridge was built and it is still in use today. It was also being used to make sails, caulking and fishing nets and lines. In later years hemp was used to make a variety of foodstuffs including butter and beer. By the 15th century Renaissance painters were using hemp canvases.

In the building industry hemp bricks, because of their sustainability and excellent insulation properties, are being used to construct external and internal walls of ecological homes.

Canna brick derives its properties from industrial hemp fibres (camo). The hemp bricks are made up of industrial hemp fibres, slaked lime and a mixture of innert mineral materials. The bricks combine the functions of a load bearing wall that is fire-resistant and does not require the addition of thermal or acoustic insulation.

The most important component of the eco-brick is industrial hemp which has a very low thermal conductivity (0.048W/mk) producing a brick with vastly superior insulation properties against both cold and heat. The mineral component of the bricks gives them their mechanical strength. Being a solid brick, with a high specific heat, it has the optimal thermal properties.

The mechanical strength of the block starts with formation of insoluble hydrates. The strength increases over time with the carbonation of the free lime, (a constituent of slaked lime) by moisture and carbon dioxide present in the air. Another important factor in the progressive curing of the eco-bricks is the gradual petrifaction of the industrial hemp by the lime and minerals present in the bricks.

Due to its unique composition the hemp bricks allow the transpiration and diffusion of water vapor between the inside and outside of the building equalizing humidity within the building thus avoiding humid and cold areas and minimizing condensation on the inside wall surfaces.

Slaked lime acts as the binder, basically holding the brick together, but it has other uses. The slaked lime acts as a filler protecting the brick against water entry via the external surfaces exposed to rain and snow. On the other hand it provides a protection for the industrial hemp fibers against fungal and parasite attack.