Aegopodium podagraria is commonly called ground elder, herb gerard, bishop’s weed, goutweed, or snow-in-the-mountain.  Although by many gardeners thought to be a nuisance, the plant most certainly has its virtues. 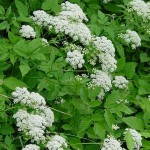 The Aegopodium podagraria is a perennial plant in the carrot family growing to 0.6 m by 1 m at a fast rate. It is hardy to zone 5 and is not frost tender. It is in flower from May to July. The flowers are hermaphrodite (have both male and female organs) and are pollinated by bees & flies. The plant is self-fertile.

It prefers moist soil types: light (sandy), medium (loamy) and heavy (clay) soils. Suitable pH: acid, neutral and basic (alkaline) soils. It can grow in full shade (deep woodland) semi-shade (light woodland) or no shade. So it is a pretty versatile plant which is hard to get rid of.

Seed dispersal and seedling establishment is typically limited by shading, and new establishments from seed are restricted to disturbed areas. However, Aegopodium podagraria readily spreads over large areas of ground by underground rhizomes. Once established, the plants are highly competitive, also in shaded environments, and can reduce the diversity of ground cover, and prevent the establishment of tree and shrub seedlings.

Once established, the plant is difficult to eradicate. The smallest piece of rhizome left in the ground will quickly form a sturdy new plant. Removing flowers before seed set may help control the spread and because the plant’s starch reserves are typically depleted by spring, removal of leaves in spring could be effective in starving the plant. Once removed, the patch should be carefully monitored periodically for a few years. New shoots should be dug up and eliminated. Re-vegetation with other plant materials is recommended. 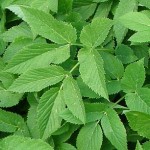 The tender leaves have been used in antiquity and throughout the Middle Ages as a spring leaf vegetable. It is best picked from when it appears to just before it flowers.

If it is picked after this point, it takes on a pungent taste and has a laxative effect. However, the plant can be stopped from flowering by pinching out the flowers, ensuring the plant stays in it’s growing phase and remains edible if used more sparingly as a pot herb.

The leaves can be used raw or cooked and have an unusual tangy, rather aromatic, flavor — a little like dandelion without the sharpness; on the way to sorrel without the lemony-ness.

Most simply, the leaves can be cooked as a spinach but young leaves can also be used in salads, soups and stocks. The young shoots make a very acceptable substitute for spinach. It is still commonly used as a potherb in Scandinavia and is used as a vegetable in Latvia and Russia.

This plant is definitely an acquired taste and most who try the plant do not like it at the first taste. 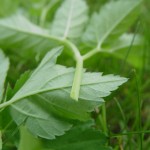 The plant also has a history as a medicinal herb to treat gout and arthritis, applied in hot wraps externally upon boiling both leaves and roots together. Ingested, the plant has a diuretic effect and act as a mild sedative. Its use as a medicinal herb has largely declined during the modern era.

The plant is said to have been introduced by the Romans as a food plant and into Northern Europe as a medicinal herb by monks. It is still found growing in patches surrounding many monastic ruins in Europe and descriptions of its use are found among monastic writings. It is also used by Chinese and Tibetan monks.

Some credit consumption of the plant, others the external use in the area of the gout, such as crushing the root and holding it at the joint. All parts of the plant are diuretic. It has been used to also treat rheumatism and bladder disorders.