Straw has been used in various ways as a construction material for as long as there has been agriculture. Early structures implement straw-clay combinations. The straw provided tensile strength and some insulation value, and gave clay building materials additional structural integrity. Europeans used straw lightly coated with clay slip to infill heavy timber construction. Many examples of both of these techniques survive today. Baled straw was first used in construction over 100 years ago by the settlers of Nebraska.

Straw-bale construction is a building method that uses bales of straw (commonly wheat, rice, rye and oats straw) as structural elements, building insulation, or both. This construction method is commonly used in natural building or construction projects. Research has shown that straw bale construction is a sustainable method for building, from the standpoint of both materials and energy needed for heating and cooling.

Straw bale construction uses baled straw in walls covered by earthen or lime stucco. Straw bales are traditionally a waste product which farmers do not till under the soil, but do sell as animal bedding or landscape supply due to their durable nature. Straw is the dry plant material or stalk left in the field after a plant has matured, been harvested for seed, and is no longer alive.

Straw bale infill construction does not rely on bales to carry any of the building loads (other than the weight of the bales themselves). Since the structural system is an independent element, it can either utilize conventional techniques or be engineered according to load requirements and building codes. The infill system makes obtaining a building permit simpler, since code officials can view the straw as an alternative insulation material. The basics of straw bale infill construction are simple to learn and require no expensive tools.

By far, the biggest concern with strawbale walls, as with any construction materials in a wet or humid climate, is moisture. High moisture content enables fungi to grow and creates the environment for the bacteria that cause decay in cellulose-based materials. There are two main ways that moisture gets into walls: it infiltrates as a vapor or it flows in as a liquid.

Liquid water can be prevented from entering a wall through careful detailing (at wall penetrations and horizontal surfaces). Bales should also be “dry” before applying finishes (moisture content should measure lower than 20%) to eliminate the potential of trapping large amounts of water inside the wall. Airborne vapor is a concern only if it becomes trapped. To prevent water vapor from getting trapped in walls, vapor barriers are eliminated, thus creating walls that “breathe”. Finishes are selected for their ability to breathe (for example, earth plasters, lime plasters, natural paints, etc.). 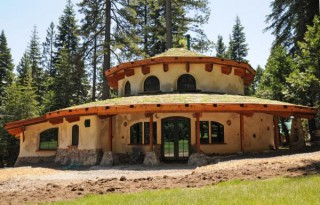 One of the aesthetic benefits of straw bale construction is that it creates a thick-wall system. Since compacted straw has good insulating properties (R=2.7 per inch), these thick straw bale walls result in highly energy efficient buildings, with R-values of approximately 43 to 48. (Note that walls with R=19 are considered to be “super-insulated”.) Insulation acts to slow the transfer of energy through the exterior walls and roof, and a higher R-value signifies more insulation.

The less energy is “lost” through the building envelope, the less heating and cooling equipment operates to provide comfort levels. Straw bale structures, therefore, require substantially less energy to heat and cool than conventionally framed structures. In addition, straw bale is most commonly finished with thick plasters on interior and exterior. The plaster acts as a thermal mass, effectively “storing” energy just inside and just outside the wall system. This helps to mediate temperature fluctuation inside, and modifies the temperature differential between interior and exterior, resulting in even greater energy efficiency.

Loose straw is highly flammable, however bales of straw are compacted tightly enough that they deprive any would-be flame of needed oxygen. In addition, finishes typically used on straw bale walls (plasters and stucco) are fire resistant, often used specifically as fire-proofing.

In a small-scale fire test (ASTM E-119) performed in New Mexico on a straw bale wall assembly (straw bale panel with plaster on one side and stucco on the other), the panel out-performed most standard types of construction (with the exception of solid wall construction of non-combustible materials, such as stone, adobe, rammed earth, etc.).