Turning the compost is something most people with a garden and a compost pile do, as many believe it is necessary for one reason or another. Turn, turn, turn, has become the mantra of composters worldwide. But is it really necessary? We will take a look at what’s what. 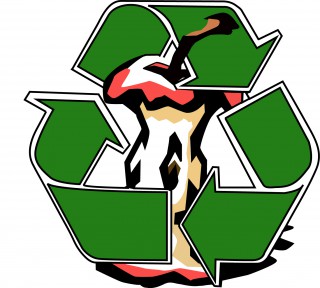 Much of compost’s current popularity in the West can be attributed to the work of Sir Albert Howard, who wrote An Agricultural Testament (1943) and several other works on aspects of what has now become known as organic agriculture. Sir Howard’s discussions of composting techniques focus on the Indore process of composting, a process developed in Indore, India. The two main principles underlying the Indore composting process include: 1) mixing animal and vegetable refuse with a neutralizing base, such as agricultural lime; and 2) managing the compost pile by physically turning it.

A large industry has emerged from this philosophy, one which manufactures expensive and elaborate compost turning equipment, and a lot of money, energy, and expense goes into making sure compost is turned regularly. To some composters, the notion that compost doesn’t need to be turned at all is utter blasphemy. Compost needs to be turned…. Or does it….? In fact, it does not, especially if you’re a backyard composter. The perceived need to turn compost is one of the myths of composting.

Turning compost can potentially be beneficial for four basic purposes. 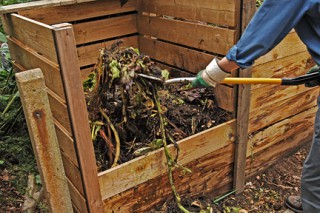 As most backyard composters don’t actually market their compost,  most could care less if it’s finely granulated or somewhat coarse. Also most have reason to be in a hurry. So we can eliminate the last two reasons for turning compost right away. Now let us take a closer look at the first two.

Aeration is a necessity for aerobic compost. There are numerous ways to aerate a compost pile. One is to force air into or through the pile using fans, which is common at large-scale composting operations, where air is forced from under the compost piles. The air seeps into the organic mass keeping it aerated. However, this air flow is more often than not used to reduce the temperature of the compost. Forced aeration is never needed of the backyard composter, and is limited to large scale composting operations where the piles are so big they can smother themselves if not subjected to forced aeration.

Aeration can also be achieved by poking holes a few in the compost pile. This seems to be popular among some backyard composters and is far less labor intensive as turning. Another largely ignored method is to build the pile so that air spaces are trapped in the compost. This is done by using coarse materials in the compost, such as hay, straw, weeds, and the like. When a compost pile is properly constructed, no additional aeration will be needed.

Good compost can be made without turning by hand if the materials are carefully layered in the heap which is well-ventilated and has the right moisture content.

This is especially true for “continuous compost,” which is different from “batch compost.” Batch compost is made from a batch of material that is composted all at once. Backyard composters produce organic residues daily, a little at a time, and rarely, if ever, in big batches. Therefore, continuous composters add material continuously to a compost pile, usually by putting the fresh material on the top. This causes the thermophilic activity to be in the upper part of the pile, while the thermophilically “spent” part of the compost sinks lower and lower to be worked on by fungi, earthworms and lots of other organisms.

Turning continuous compost dilutes the thermophilic layer with the spent layers and can quite abruptly stop all thermophilic activity. 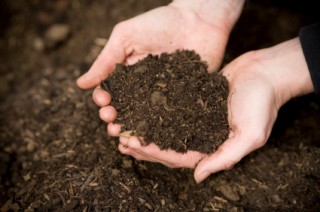 Researchers report that, “Oxygen concentration measurements taken within the windrows  (a windrow is a long, narrow pile of compost) during the most active stage of the composting process, showed that within fifteen minutes after turning the windrow, supposedly aerating it, the oxygen content was already depleted.”

Other researchers compared the oxygen levels of large, turned and unturned compost piles, and have come to the conclusion that compost piles are largely self-aerated. “The effect of pile turning was to refresh oxygen content, on average for only about 1.5 hours (above the 10% level), afterwhich it dropped to less than 5% and in most cases to 2% during the active phase of composting . . . Even with no turning, all piles eventually resolve their oxygen tension as maturity approaches, indicating that self-aeration alone can adequately sustain the composting process . . . In other words, turning the piles has a temporary influence on oxygen levels.