There are several reasons that people are crazy about their cast iron pans and cast iron skillets. Besides being an ideal heat conductor, cast iron cookware heats evenly and consistently, it is relatively inexpensive and will last a lifetime (actually several lifetimes) with proper care, and it is an old-fashioned way to cook fat free. When well seasoned, a cast iron pan will be stick resistant and require no additional oil.

Most bare cast iron pots and pans are cast from a single piece of metal in order to provide even distribution of heat. This quality allows most bare cast iron pans to serve as dual-purpose stove-top fryers and oven baking dishes. Many recipes call for the use of a cast iron skillet or pot, especially so that the dish can be initially seared or fried on the stove-top then transferred into an oven, pan and all, to finish baking. Likewise, cast iron skillets can double as baking dishes.

Although there are many benefits to cast iron cooking, there are a few drawbacks you need to consider.

But once you take the plunge, you will wonder why it took you so long to start. 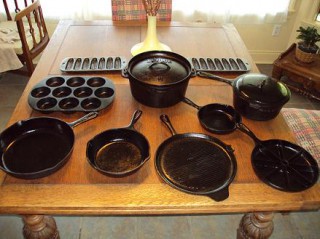 Cast-iron pans are only non-stick when they are properly seasoned. Seasoning a pan involves coating the pan with a heat-tolerant fat and then allowing it to bake into the iron, creating a slick surface.

Cast-iron pans are often used for high heat cooking, whether you’re frying an egg or baking corn bread. For that reason using a saturated fat, which is more stable over high heat, for seasoning is the preferred choice. Good choices of saturated fats include: coconut oil, lard, beef tallow.

Once your pan is clean and dry, and still warm from your stove top, add just enough fat to coat the pan bottom and sides. Then use an old cloth napkin to distribute the oil all over and soak up any extra. Then put your pan in a 250 degree Celsius oven for a few hours. You now have your initial layer of seasoning. You can repeat this process anytime you find that your initial seasoning isn’t holding up. 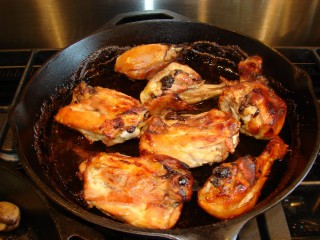 The first thing to know when washing your pan is do not use soap. Soap will remove the layer of seasoning.

That’s all. It may sound a bit more complicated than the care of your regular pots and pans, but really it is just a different process and not more difficult.