Bamboo construction is often associated with poor rural housing somewhere in a remote tropical country, but as a building material, bamboo stands out because of its structural and mechanical properties, its strength/weight ratio is one of them. Although bamboo has been referred too as the poor man’s timber, it is now becoming increasingly popular. 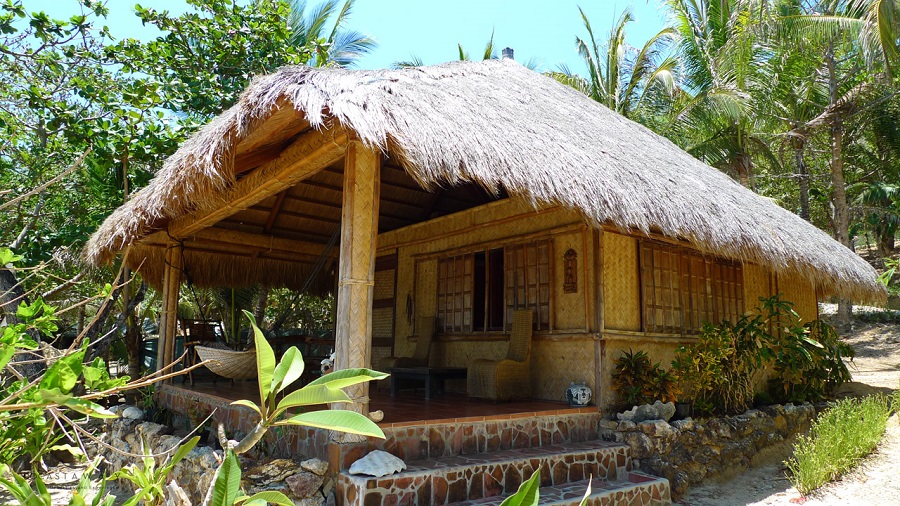 Bamboos are some of the fastest-growing plants in the world, due to a unique rhizome-dependent system. Bamboos are of notable economic and cultural significance in South Asia, Southeast Asia and East Asia, being used for building materials, as a food source, and as a versatile raw product. Bamboo has a higher compressive strength than wood, brick or concrete and a tensile strength that rivals steel.

Because of the global demand for non-polluting, sustainable, and earthquake resistant building materials, the interest in bamboo construction among western innovative architects is growing rapidly. Bamboo not only offers optimal solutions for communities with smaller resources, it is also a popular resource and study subject for professionals and institutions of a high economic level which translated itself in high end residential homes, schools, offices, hotels, etc. 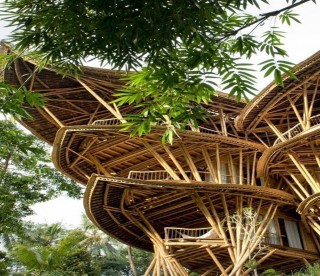 Of the two types of bamboo, the “running” type occurs only in temperate climates or in the high mountains of the tropics. Running bamboo produces both a culm (the above-ground vertical shoot) and long horizontal underground shoots called rhizomes. Tropical bamboo is almost always a “clumping” type, which tends to produce larger-diameter and thicker-walled culms. But its rhizomes are very short, so the bamboo plant stays more contained in a “clump.”

Different species of bamboo have different wall thickness, with a couple species being entirely solid. Bamboo is a natural composite. The walls are composed of “vascular bundles” of which there are five types. The outside portion of the culm wall is dense, containing about 5% silica. It has an exterior waterproof film which occurs on the softer interior portion as well. Bamboo is particularly strong at the node, where there is an inner disc called the septum which connects the outside walls, strengthening the stalk and separating in into compartments. Bamboo is widest at ground level, but is quite consistent in diameter throughout its length.

Bamboo is useful for different things at different ages: 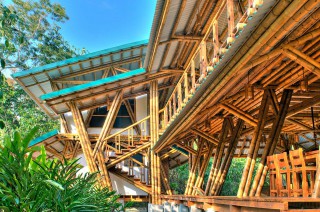 Bamboo for construction is best cut right after new shoots have started to grow, as the plant will have given all its starch to the new culm. It is important to cut bamboo just above the node at the base.

The age of the culm is very important to know in order to select culms with the greatest strength for bamboo construction. One-year-old bamboo is an emerald color with the sheaths just beginning to fall off. Bamboo 2-3 years old has white spots on the culm, indicating the beginning of lichens. At 5-6 years these lichens can be clearly seen. Branches also tell the age of a bamboo plant. Every year each culm of bamboo loses its branches which are replaced with new branches. 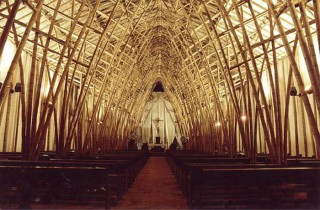 Old bamboo is attacked by insects from the interior of the plant, which can be difficult to detect.For longer lasting structures it is important to treat bamboo against rot and insects.

To protect bamboo from fire use plaster. For structural bamboo it is important not to penetrate the septum as it is the crucial part of the bamboo for strength. Small diameter holes can be put in the sides of bamboo, however. To avoid problems it is important that the bamboo is dry before used in construction.