Adobe is the Spanish word for mud brick, a natural building material made from sand, clay, water, and some kind of fibrous or organic material (sticks, straw, and/or manure), usually shaped into bricks using molds and dried in the sun. Adobe buildings are similar to cob and rammed earth buildings, but cob and rammed earth are directly made into walls rather than bricks. The Romanian name for this material is chirpici.

Adobe construction is one of the oldest and most versatile building techniques used by humans. You can find it in the simplest of one-room huts and the world’s most elaborate mosques. Adobe construction is not very complicated. There’s a growing movement among natural builders and community-action groups to build with adobe.  But be careful before you start building, though: Adobe works better in some places than others. 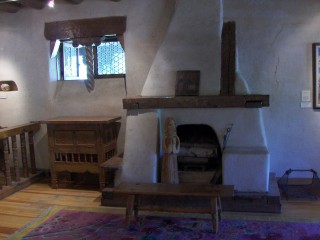 The mud for the bricks might include sand, small gravel or clay. Water, and often straw or grass, are mixed with the dirt. The resulting mud dries naturally in the sun and air. Because fire isn’t used to cure them, adobe bricks aren’t hard. They shrink and swell with the weather. An extremely wet climate or areas prone to flooding might turn the bricks back into mud. Also, frequent freezing and thawing can make the bricks crumble. This is why adobe is used primarily in dry, mostly warm climates. However, with careful site selection and appropriate construction techniques, adobe can be used in wet and cold areas.

Adobe was one of the first materials ancient humans used to create buildings, dating as far back as the 8th century B.C. The word “adobe” is Spanish, but has its origins in an old Arabic word, al-tob oral-tub, meaning “brick.”

The largest adobe building in the world, and probably the most famous adobe structure standing, is The Great Mosque at Djenné in central Mali, near the edge of the Sahara Desert. The Great Mosque was built in 1907 on the ruins of earlier mosques. It has walls as thick as 61 centimeters, and arches measuring 13.7 meters high and covers some 5,806 square meters.

How to make Adobe bricks 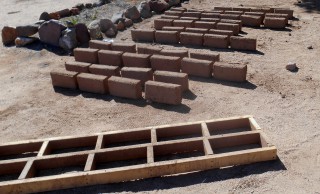 Sand and clay are mixed with water. Straw or grass (and sometimes manure) is added. This helps the mud shrink into uniform brick shapes as it dries. The mud mixture is put into wooden forms and leveled by hand. (you can make them any size or shape you want, but they should be easy to move by hand) The bricks are removed from the forms and laid onto a surface in the sun that’s covered with straw or grass. After they have dried for a few days, the bricks are set on their edges for at least four weeks of air-drying.

How to build with Adobe

Build a solid foundation,  foundations can be made of stones or other locally available materials.  Then lay the Adobe bricks with mortar. A mud based mortar works best because it shrinks and swells with the bricks. Cement and similar mortars are not advised as they are too strong and rigid. Stack the bricks together to make thick walls (approx. 25 cm) for strength. Leave openings for doors and windows. Not too many, as they will weaken the structure. And use wooden lintels (supports) over the openings. 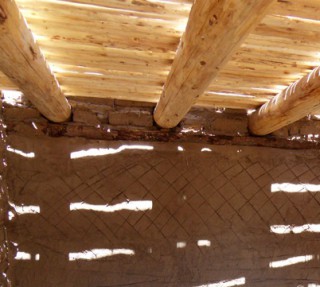 The roofs on adobe houses traditionally vary with the location and the availability of materials, but any roofing type will work. When you are building in a wet climate be sure to create large eaves (roof overhang) as they will protect your structure from water damage. For roof construction often logs or rough timbers (called vigas) are used as supporting beams, with sticks laid over and between them under the roofing. To finish the walls you select a coating. You could use coatings of earthen plaster, whitewash, lime plaster to protect adobe walls. Stay away from cement based finishes as the walls need to breath to prevent moisture build up which can damage your walls. 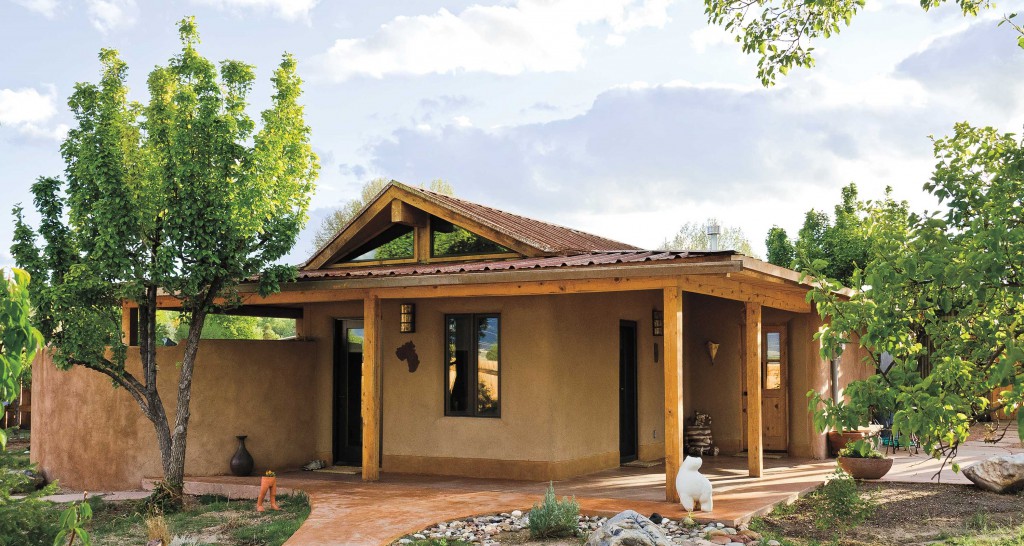