We all know that concrete and steel construction create enormous amounts of greenhouse gases. Wood can be sustainably grown, but harvesting, milling and transport use large amounts of energy. In fact forty-percent of global carbon dioxide is linked to the construction industry. 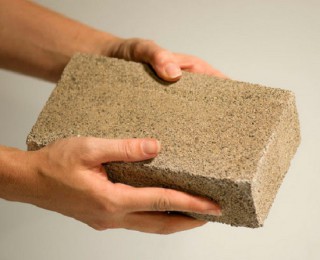 It is definitely time for a change in construction materials and Ginger Krieg Dosier might just have the solution.

Each year the world produces 1.23 trillion bricks, enough to stretch from the earth to the moon 325 times! It is estimated that brick making produces 800,000,000 tons of CO2 each year. Dosier feels we could keep that 800,000,000 tons out of the atmosphere, if we grew our bricks rather than fired them.

Introducing the biomanufactured brick, made with local sand and a few other low impact ingredients (bacteria, calcium chloride, and urea). Tests demonstrate that bio bricks can be compared in strength with traditionally fired clay bricks and even marble. Dosier was inspired by coral which also grows itself.

Biomason has won the Cradle to Cradle Innovation Challenge 2013 and the 2013 Postcode Lottery Green Challenge award.