Abobe brick making is a simple technology, all one really requires is (clay rich)dirt (occasionally straw) and water. Making an adobe brick requires a great deal of dirt. A 20 liter bucket with a full load of dirt will make almost three “Traditional New Mexico” size bricks 10 cm thick, 25 cm wide, and 35 cm long. A brick this size will weigh about 12 Kg. 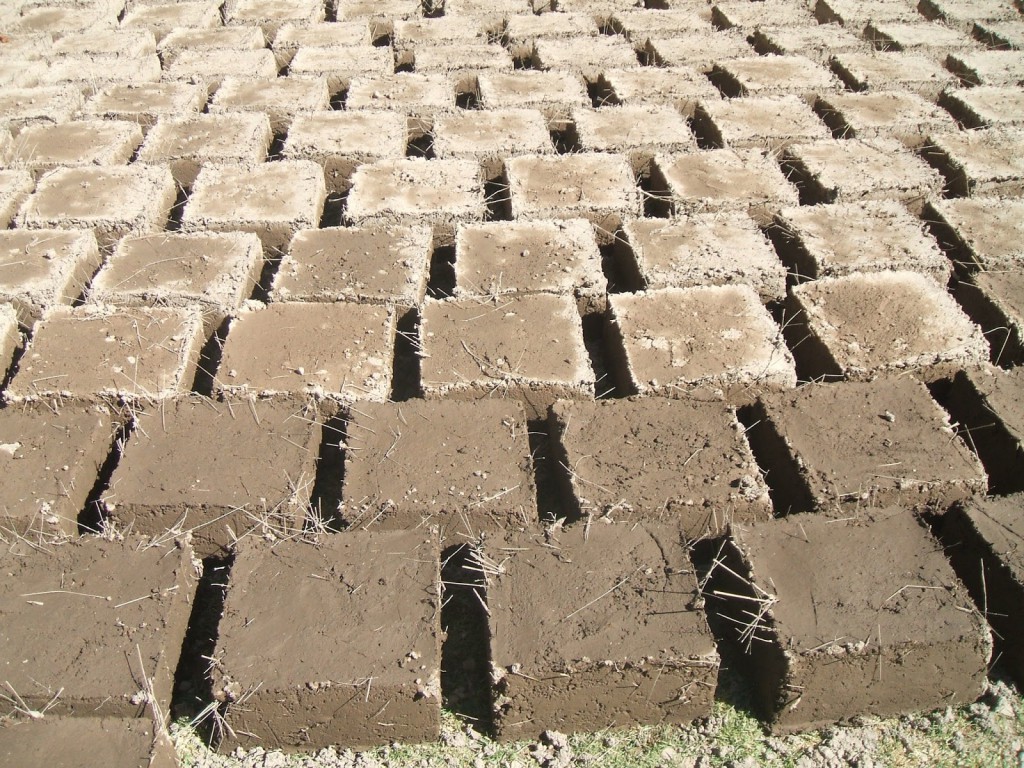 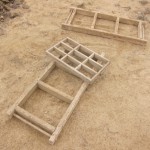 You can make adobe brick forms out of 2×4 wooden studs. The inside space should be the size of the brick you desire. For the “Traditional New Mexico” size, the inside space should be 25 by 35 cm, with the 2×4 resting on its 2-inch side. You might want to include a handle on both ends to help you lift the form free of the mud once the mud has set for a few hours. The size of the adobe brick will depend on one’s desired wall thickness, and how much weight per brick you or your workers are able to lift comfortably over an extended period. 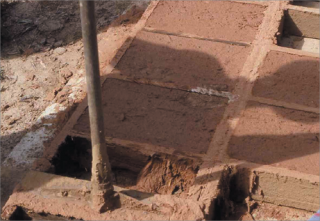 The image shows a small form filled with mud. The mud has been shoveled in and then smoothed.  The forms require smoothing, you can use of a 2×4 piece of wood that may be put on the end of a pole, which will rest along the side rails of the form so that excess mud can be pushed off easily. 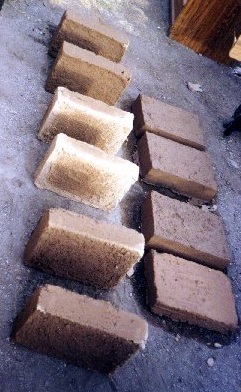 This image shows adobe bricks drying while resting on their edges. Once the mud has been setting in the forms for a few hours, the forms are lifted up and excess dirt is knocked off the forms. The forms need to be cleaned before being used again, a putty knife can be used to scrape them free of excess clumps of dirt.

Once the forms are removed, the bricks should be left laying flat for about three days, and only then placed upon their edges. In the image you can see the corners of the two damp bricks at the bottom turning white: this shows they were ready to be placed on their edges. The four bricks still laying flat show no white edges yet, so they remain laying flat.

The two bricks in the middle that are on their edges are almost dry, they needed some more time to fully dry. This is a good time to use a putty knife and scrape off excess mud from the brick, and shape it properly if there are any bulges. You can also use your hands, with work gloves on, to brush away the excess clumps from the bricks.

After you have made some test bricks, you test them by dropping them from about 1 meter high to see how brittle they are. If the bricks shatter to easily it means that the bricks were made with too much sand and not enough clay. Bricks should be able to survive the drop with little or no damage. 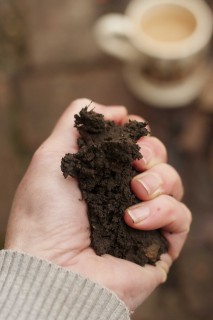 A good brick will have the right mixture of clay and sand, so that it will be strong and resist moisture (from the clay content), but not crack while drying (sand content). If cracks show, this means there is too much clay in the dirt, and sand should be added. Too little clay and the brick will be too brittle. You could add a little straw to the mix of your bricks to increase the strength.

Dirt suitable for adobe brick should have a high enough clay content to help the brick resist moisture and provide strength to the brick. The problem is that dirt with too much clay in it will crack upon drying. If dirt has too much clay, you can add sand to it and if available some straw. Dirt with too little clay will mean that the dried brick will be too brittle to use. 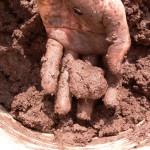 The best way to know if your soil is good enough to make adobe bricks out of is to make test bricks. If the brick is dropped onto one of its corners and there is little damage, the dirt will very likely be usable for building.

One may also mix a bucket of dirt with a little water and see how well the dirt adheres to itself,  if it can be molded and rolled into balls, but pulls apart with only a little effort, then it is worth trying test bricks with the dirt. If it pulls apart too easily, or does not form into balls easily, then the sand content is probably too high and the dirt will probably not be worth using for test bricks.