While this cabin perhaps looks spooky or even lizard-like, its unusual structure was created in response to Swedish environmental building regulations. The solar-powered off-grid cabin is owned and designed by Maartje Lammers and Boris Zeisser of 24H Architecture as a family summer vacation retreat in southern Sweden’s Glaskogen nature reserve. The locals of the lakeside area affectionately call the house “Dragspelhuset,” or Accordion House because a room of the house is capable of extending outwards over the nearby stream.

Before Lammers and Zeisser converted this stream-side cabin into a wondrous, fantastical retreat, it was a small, one room fishing shack on the banks of Lake Ovre Glaskogen. According to Swedish regulations, no new construction is allowed on waterfronts, and the cabin was already very close to the maximum set-back from the property line, which made additions challenging. As an additional restriction, no additions to the cabin could be larger than 300 sq feet, but they found the location ideal and bought it anyways. With a bit of ingenuity and a careful design to maximize space they were able to build according to regulations and still have their dream retreat. 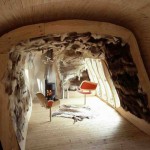 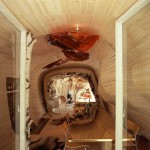 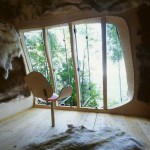 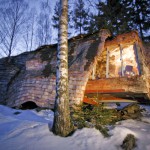 Inspired by Frank Loyd Wright and Fallingwater, Zeisser wanted a house that extended out over water. To meet all the Swedish regulations and their own requriments, Lammers and Zeisser designed for a moveable room that can be rolled out along two steel rails with a series of ropes and pulleys. This living room area extends out while the family is in residence, and returns into position when they leave. This way, the extension has no foundation and is really a part of the main footprint, which circumvents the size restrictions on additions and set-back lines. 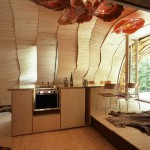 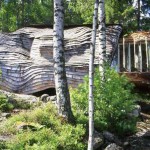 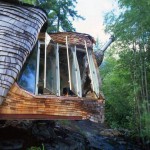 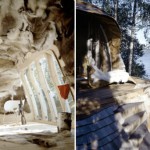 The organic cabin has a frame constructed of pine, with western red cedar shakes, which will eventually turn gray, blending in with its surroundings. The interior is naturally bright and lined with silver birth laths. Reindeer hides were nailed to the walls and ceiling to provide extra insulation, which was inspired by the Sami culture in Northern Scandanavia. Additionally, the cabin has no running water or phone lines and is not tied to the electric grid. The off-grid cabin is powered by solar panels on the roof. 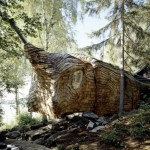 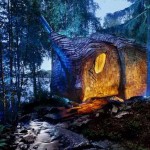 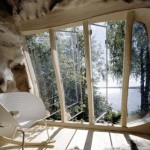 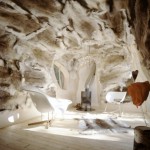 When fully extended, the cabin is 775 sq ft, with a kitchen, living room, dining room, bedroom and a sleeping loft. As the architects describe Dragspelhuset, they see it as a tightly sealed cocoon in the winter when the movable extension is stored inside the body. When they return in the summer and extend the living room, they liken it to a butterfly expanding its wings to provide shelter on rainy days. Either way, it is an ingenious use of a small space, totally off-grid and in harmony with its surroundings.