Herzog & de Meuron have done a number of buildings for Ricola, the Swiss cough drop company with the really annoying commercial. Now they have completed the Kräuterzentrum, or herb processing center, where the drying, cutting, blending and storing of the locally grown ingredients takes place. The walls of the building are rammed earth, built by Lehm Ton Erde (Loam Clay Earth).

There are a lot of benefits to building with rammed earth. The thick walls have tons of thermal mass, which stabilizes the temperature and humidity, significantly reducing the need for air conditioning. It is made from local materials sourced less than 10 kilometers away, prefabricated in a temporary factory in a nearby town. “No elements are used other than natural and organic earth from Laufen. This is especially energy-efficient,” asserts [CEO] Felix Richterich. 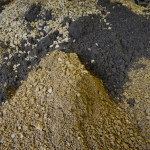 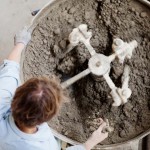 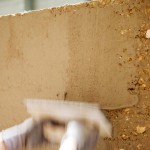 Clay, marl and material excavated on site are mixed and compacted in a formwork and then layered in blocks to build the walls. Thanks to the plasticity of the loam, the seams can be retouched giving the overall structure a homogeneous appearance. To arrest erosion caused by wind and rain, a trass mortar achieved mixing volcanic tuff (trass) with lime, is compacted every 8 layers of earth directly in the formwork. 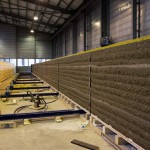 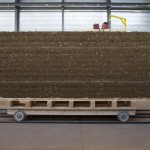 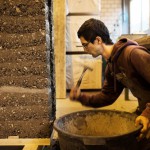 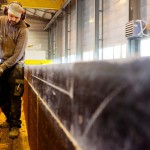 Those white lines of mortar act as overhangs and stop the earth from washing away. In North America many rammed earth buildings have cement added to the mix of earth to preserve it, turning it almost into concrete; here, the walls are pure dirt inside and out. Martin Rauch of Lehm Ton Erde notes that mud isn’t just for huts anymore:

Many people think that nowadays loam is only used in developing countries to build the most basic huts. However, the Ricola Herb Center makes a strong statement about future perspectives and the positive qualities which loam construction can have in Europe as well. 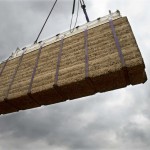 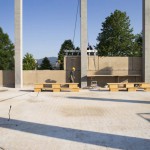 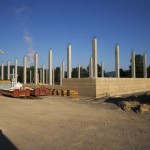 Rammed earth is such a wonderful material, it doesn’t get any more natural. Prefabricating it inside instead of hammering it into formwork on site probably has benefits in terms of consistency and less worry about rain getting on it prematurely. However those panels are heavy and do require additional equipment for lifting and placement.