Believe it or not, peak phosphorus is probably our biggest global emergency, but hardly anyone is talking about it.

Phosphorus is one of the most the important elements of life. It is a major component of RNA, DNA, and ATP (the molecule produced by photosynthesis that carries energy to the other plant cells, which in turn provide us with energy). Of the nutrients used as building blocks for life, the following elements all have gaseous phases at the temperatures and pressures found on the surface of the Earth and are therefore easily redistributed through the air:

However, the following elements are solids or liquids and don’t move around so easily:

In a natural ecosystem or on a traditional small farm, plants take these molecules out of the soil and air to build themselves. Animals eat the plants and use the same molecules to construct their bodies. When the plants and animals die, microbes return the molecules to the soil. Lather, rinse, repeat. 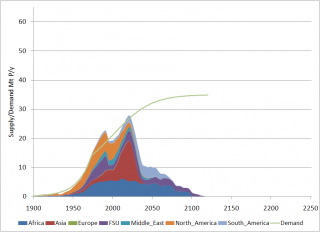 On the other hand, with our current industrial agriculture system the plants do their part and take in the molecules they’re supposed to, but then we ship them to a feedlot or city where they are consumed and decay far away from where they originated. The molecules of the elements easily transported by air are replaced relatively easily, but the molecules of solid and liquid elements won’t make it back to the field they came from for a long, long time.

Phosphorus is more sensitive to this imbalance than the others because it is 10 times more concentrated in the body than it is in the Earth’s crust. None of the others are more concentrated in living beings like that. The phosphorus was originally put in the soil by weathering phosphate rocks. That’s still going on, but that process took millions of years to build up the reserves we used during the last century.

To replace the missing phosphorus, we mine phosphate rock, grind it up, and sprinkle it on the soil for the plants to use as RNA, cell walls, etc. This seemed like a great idea when we figured it out 170 years ago. It continued seeming like a good idea all the way up until about 40 years ago when we started noticing the two big problems with this system: 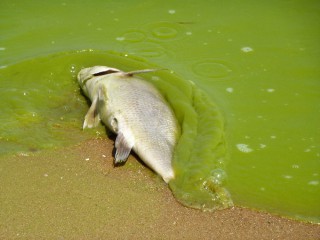 Phosphorus that doesn’t get used is washed away by rain into rivers and eventually into the ocean. Phytoplankton (algae) in the ocean are very happy with their newfound abundance. They grow fat and reproduce prolifically. The problem comes when they die. As the algae is decaying, the bacteria breaking it down use too much of the oxygen dissolved in the water, killing everything else in that area. 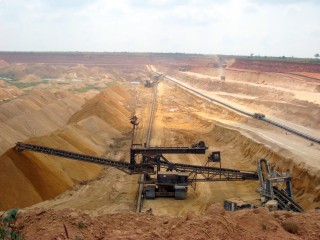 We’ve already used half of the phosphate rock available. According to a study by Patrick Dery peak phosphorus occurred in the US in 1988 and the rest of the world in 1989. Others think we’re still 30 years away from the peak, but it doesn’t matter who’s right. Either way, unless we change what we’re doing now, we will have depleted our supply of the central building block of life within a few hundred years of discovering it, and we do not know how to make more.

Fortunately, the solution is easy. We did it for our first 100,000 years, and we’re the only creatures not currently doing it. The answer is eat, poo, and die in one place.

That doesn’t mean we all have to be farmers, but it does mean we need to become local-vores again and get over being squeamish about the fact that we’re animals that are part of the web of life.

Plant food in your yard. Buy the food you don’t grow from local farmers. Insist on pasture raised meat. Compost every organic material you can find. Crap in a bucket. When it’s time to die, have yourself planted in the ground without preservatives so that a tree can build itself out of the molecules you’ve been using.